NLDAS views of the Pineapple Express

The North American Land Data Assimilation System (NLDAS) operational datasets are used to view rain and snow accumulation events during the winter of 2016-2017.  These heavy precipitation storms have greatly reduced the drought in California.  NLDAS uses high-quality surface observations, including a precipitation gauge analysis, to drive several land-surface models (LSMs), and is updated daily at NOAA's NCEP Central Operations.  Hourly/monthly NLDAS Phase 2 datasets going back to Jan 1979 are freely distributed and are widely used, including by the U.S. Drought Monitor.
Figure 1 is from MetricMaps, which used the NLDAS-2 precipitation climatology to calculate the month during the water year (starting on Oct 1st) when each U.S. county typically hits half of its total annual precipitation.  Areas of the U.S. West Coast, including California, reach half of their annual precipitation by January or February.  Much of this precipitation is a result of strong storms reaching the coast from the Pacific Ocean, often from atmospheric rivers that bring plenty of moisture from the central Pacific to the West Coast.  These events are often named a "Pineapple Express".

Figure 1: Month where half of total annual precipitation is reached for water year by U.S. county in the NLDAS-2 climatology (image from MetricMaps).
Figure 2 depicts a map of the total NLDAS-2 precipitation that fell over an 8-day period from Jan 1 to Jan 8, 2017.  Much of northern California received over 4 inches of total precipitation, while mountainous areas received more than 8 and up to 16 inches of precipitation.

Figure 2: NLDAS-2 total precipitation (inches) from Jan 1 to Jan 8, 2017.
Figure 3 depicts a running sum of the area-averaged precipitation over the USGS HUC02 California region.  The accumulation begins at the start of the water year on Oct 1, 2016.  Significant increases in total precipitation are shown around Dec 16, 2016 as well as two strong "Pineapple Express" events during the first week of Jan 2017. 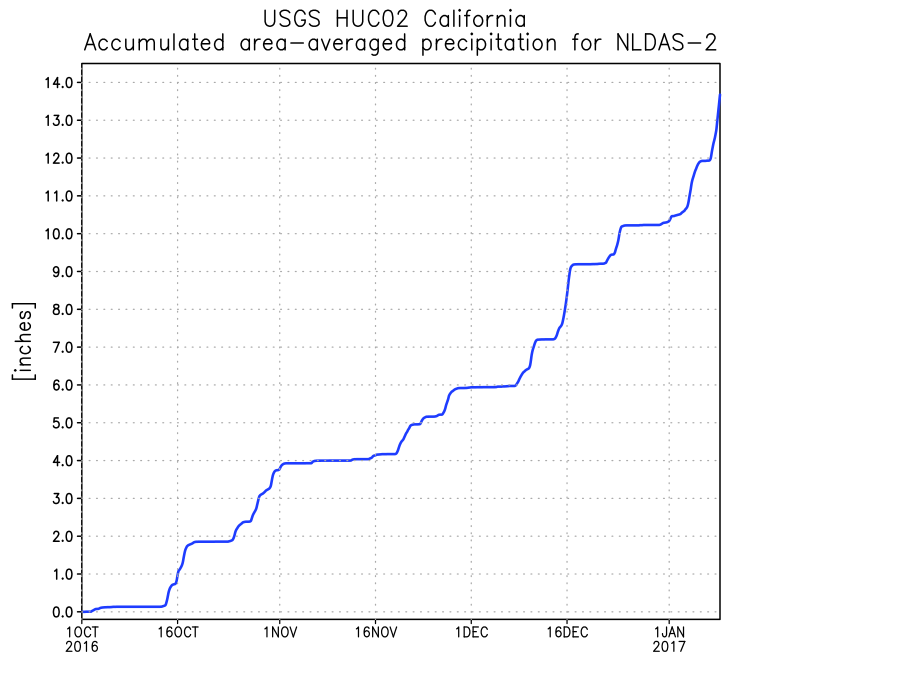 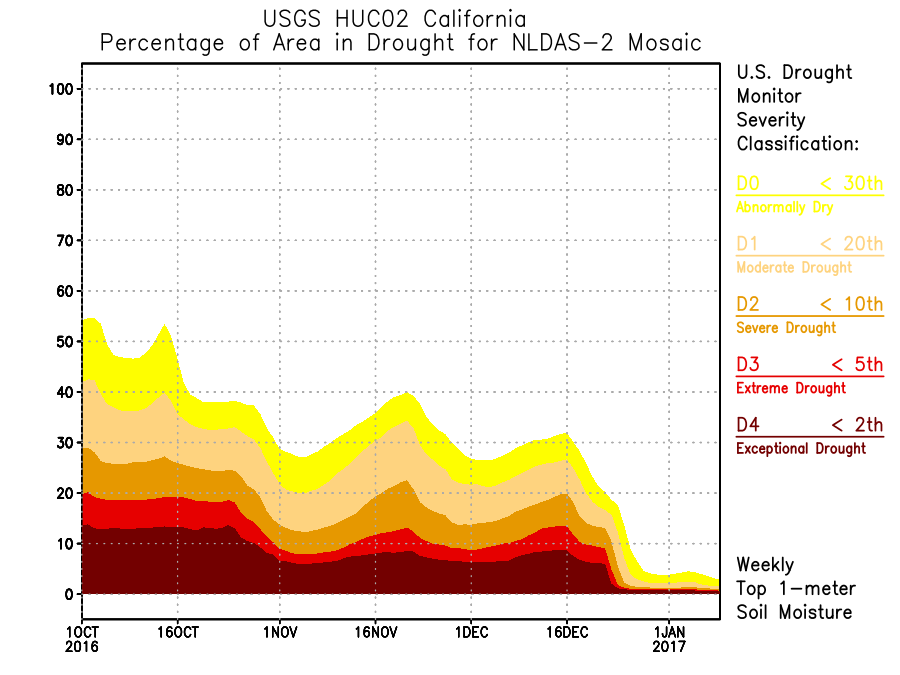 Figure 4: NLDAS-2 Mosaic LSM top 1-meter soil moisture drought extent/severity depicted as percentage of area in the USGS HUC02 California region.
Figures 5 and 6 depict the surface snow depth as simulated by the NLDAS-2 Mosaic LSM.  Figure 5 is a map showing very deep snow depths over mountainous locations on Jan 8, 2016.  Figure 6 is an area-average of the USGS HUC02 California region with elevations above 4,000 feet from the start of the water year.  Significant increases in the snow depth over a wide area at high elevations are shown during the first week of Jan 2017. 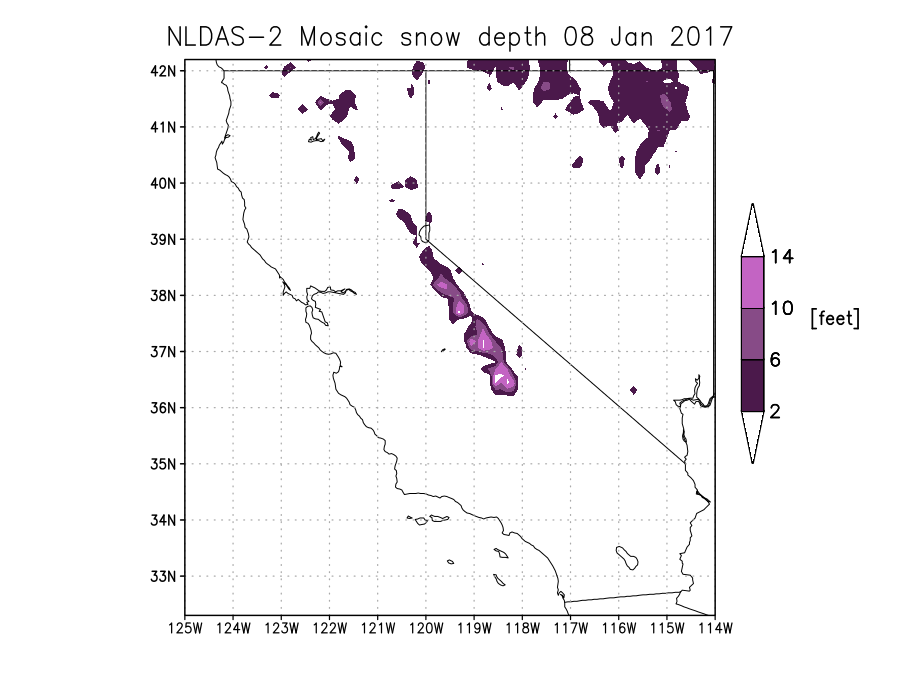 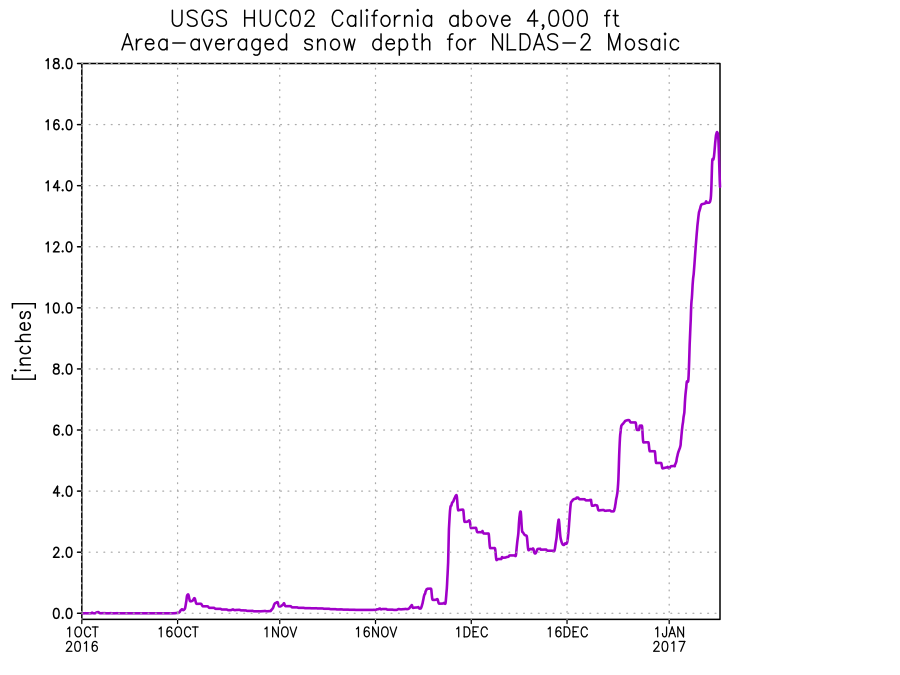 Figure 6: NLDAS-2 Mosaic LSM area-averaged snow depth (inches) for the USGS HUC02 California region above 4,000 ft elevation.
NASA SPoRT also published a blog post on atmospheric rivers impacting California in 2017, including figures on atmospheric precipitable water, SPoRT-LIS simulated soil moisture (which uses NLDAS-2 precipitation as one of its inputs), and surface soil moisture retrieved from the Soil Moisture Active Passive (SMAP) satellite.
NLDAS is a collaboration project primarily supported by two groups: NOAA/NCEP’s Environmental Modeling Center (EMC) and NASA/GSFC.  Other groups that have contributed to NLDAS since its inception in 1999 include Princeton University, the University of Washington, the NOAA/NWS Office of Hydrological Development (OHD), and the NOAA/NCEP Climate Prediction Center (CPC).  NLDAS is a core project with support from the NOAA Climate Program Office's Modeling, Analysis, Predictions, and Projections (MAPP) program.  Data from the project can be accessed from the NASA Goddard Earth Science Data and Information Services Center (GES DISC) as well as from the NCEP/EMC NLDAS website. Full documentation is available at GSFC's NLDAS website.
David Mocko (David.Mocko@nasa.gov)